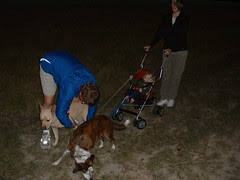 Dogsled Stroller
Originally uploaded by Uncle Mikey.
You can barely tell from my awful picture, but this is a friend strapping his dogs to his child's stroller, apparently in hopes that his child will be as desensitized to violent motion as he and those who ride in his car have become. As you might imagine, it worked less than perfectly and tended to strangle the poor child when the dogs switched places and caused the leashes to cross around his tender little throat, and the dogs wanted to run wildly over uneven ground while dragging the stroller almost too fast for the adult to hold on, and Lord knows what would have happened if they had managed to wrench it out of the adult's grasp . . . It worked nicely without the baby, but otherwise it is not safe for child locomotion. Adults, on the other hand, would have a great time, I'm sure of it.
Posted by Uncle Mikey at 11:33 AM