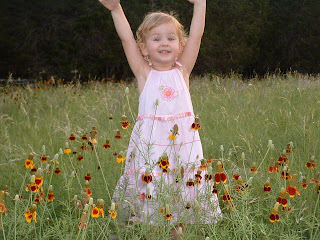 Sweet Sabrina in the wildflowers, May 2008. What a little angel. We were walking Fred a couple of days ago and she asked me to tell her a story. She gave a lot of instructions about who was to be in the story (Sully and Mike from Monsters, Inc., Nemo, Marlin, Dory and some other Finding Nemo characters, and Monster Bear from the Little Bear chronicles) and what the setting was to be (the beach), and after a few minutes of story she exasperatedly told me that SHE would be telling the story from now on, thank you very much. And she did. And it was fantastic.

That's never happened before and I like it. Her imagination is so active, we have to be careful about discussing injuries and illness because she'll tell us she has a broken arm or a cold if she's heard about one or the other that day. I'm worried we'll miss a real problem because we read a story about that problem just before it actually happened. Silly . . .
Posted by Uncle Mikey at 8:47 AM

Awesome pic! ..... Way to go Sabrina, you should be the only story teller! All of Mike's stories end with a shootout in a crack house....Nemo in a crack house..God forbid I see that day with Dora the mule bringing the smack to town.