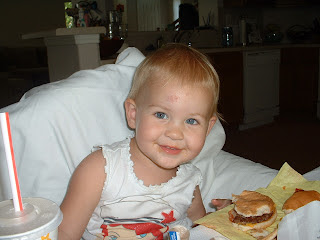 I've done a lot of dumb things in my life, and I'm ashamed to report that some of them have involved my sweet daughter Sabrina. Two in particular come to mind: first, throwing a cell phone up the stairs, over a railing and through a door into our bedroom, where it bounced off Mommy and hit Sabrina in the head (I can't imagine a way to make doing that sound like a good idea, even though it made perfect sense to me at the time); and now, what you see on her forehead at left. I thought a flying mount of the stroller by Sabrina as she ran alongside it would be fun for all, but when I got her in the seat she tried to jump out, dead ahead as we were still moving at a decent clip. I was torn between speeding up enough to knock her back in the seat and hoping she'd have the sense to stay put long enough for me to stop, or slowing down as gently as possible and hoping she'd compensate backward in self-defense. I went with #2 and you can see the result (pic is from the next day).

I'd like to believe I made the right choice. We were pretty much dead stopped when she toppled out and landed flat on her feet, and then her knees, tummy, arms and forehead, and she almost didn't fall at all. But that doesn't change the fact that I did something dumb with the baby in front of my wife (and apparently a couple of my friends who were watching from a nearby disc golf tee box) and had to be punished. I pushed the stroller ashamedly behind mommy as she carried my screaming daughter home. I think she left the pebbles from the jogging path stuck to her face all the way home just to make sure I felt as bad as possible, but she says she thought they were really embedded and were keeping her from bleeding (I'm quite sure that I'm not allowed to pursue that line of reasoning further and will now drop it if I have any sense).

All in all, much less damage than we expected for this particular injury. It could have been a lot worse, of course. Sabrina is never so happy as when she barely escapes major injury, and she trusts us completely to keep her out of trouble. She'll jump from anything to anything else, or to nothing at all, if we're close enough to catch her, and laughs her ass off when we barely save her from cracking her head open. She can't swim worth a damn but will launch toward either of us from the steps or the side of the pool, usually after shedding her swim ring.

I love all that about my daughter, and I'm sure she'll be fine despite many adventures, but I worry about Mommy's anxiety level. Let's break her in easy, OK Sabrina?
Posted by Uncle Mikey at 8:32 AM

Is that McDonald's your feeding her? That is more of a travesty than your stroller escapades will ever be......